The most difficult aspect of being on a multidisciplinary team is the fact that you don’t always speak each other’s language.  Communication can be a problem.  All of us are so immersed in what we do that we know what we need and our limitations.  If we knew that the people we were working with didn’t understand those limitations, we would gladly explain them.  However, it doesn’t become clear that there’s been a miscommuncation or lack of communication until we’re looking at a project and asking why the person didn’t do things a different way. From my perspective, it’s a bit difficult to do modeling and then hand my work to someone who will make the thing I’ve modeled.  Often, the way I’ve designed the model isn’t exactly the way the object needs to be built.  Then the question is whether the model is a sufficient representation of the device. […]

Training Professors to be Educators

The Atlantic had an interesting article entitled The Forgotten Student: Has Higher Education Stiffed its Most Important Client? which parallels a  recent Op-Ed in the NYTimes  on why one former executive left Goldman Sachs because they lost sight of their client. I remember reading the NYTimes Op-Ed over breakfast and I thought to myself, “I really wouldn’t want to work in a place that wasn’t looking out for the best interests of their client.” After reading the article in The Atlantic, I think the veil has been completely lifted from my eyes. I guess I should explain that. This is not to say that everything in the article was totally foreign for me and that I have never thought about some of those things. However, I never really thought of it from the view that administrators might be failing their clients. For example, there’s discussions here and here on college […] 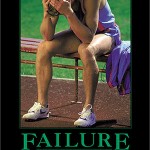 If you can’t tell from the title or the picture, the semester is over! I’ve made it through a 4-month whirlwind of activity, craziness, anxiety, and, not to toot my own horn, success. Going into this semester, I thought I had a good idea of what it took to be tenure track material (I mean, I got the job didn’t I?!?). That last month though, was a little rough at times. All in all, I think everything went about as well as it could go for my first semester teaching. I’ve read some of the comments from my class survey (I’ll discuss more in a later post) and many were of the flavor, “I was a little apprehensive about this class with a new prof and given that this was his first time teaching, it was a lot better than expected and things went well.” That’s encouraging for the future. While […]