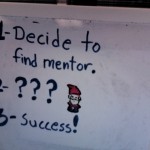 There have been some great posts on networking and impostor syndrome in the science blogosphere lately, which has prompted me to do some thinking about one of those pieces of advice that always crops up in such discussion: finding a mentor. It’s pretty generally accepted that mentorship matters at every career stage, but as someone early in my career, it seems that the first advice I’m given when I’m struggling is “find a mentor”. One mistake I think most of us make at least once is assuming that because we report to someone, they will serve as our mentor. Maybe it’s because finding a mentor is actually not a straightforward process. I can’t write a flow chart that will consistently find someone a mentor. Personally, I’ve generally found mentors simply by talking to professors outside of class, about something other than class, or talking to professors who I no longer take […]

Currently, I’m out of town attending a workshop with some very specialized people in an area in which I’m trying to make inroads. And while I won’t bore you with the details (I knew people could have such levels of nuance), I will share with you a comment that I heard over drinks. Let me paint the picture for you a little bit first. I was having a discussion with someone very high up in the food chain about current/potential/future projects. This person asked a very specific technical question related to the problem, something that would mean significant money for the company that person represents if possible. I, wanting to hold on to my ideas, remained steadfast with a response like “Talk to me in 18 months when we have it working in the lab.” This is basically a nice way of saying like hell I’m going to let you […]

This week’s theme on Engineer Blogs relates to networking and finding jobs.  I have both worked in the Real World™ as well as being a grad student and an engineer in an academic research group. My experience getting jobs before I returned to school in my mid-twenties was almost bi-polar.  People didn’t go so much on recommendations, and most of the jobs I applied for were in the paper.  (Yes, back before the internet became the world’s largest classified ad.)  I was living in southern California at the time, so that meant, of course, that I had a hard time getting jobs because I was usually competing against several hundred applicants.  I had an easy time getting jobs that I didn’t want and that didn’t pay well, but it was very difficult to find jobs I actually enjoyed.  The low spot was spending a year working as a secretary at […]