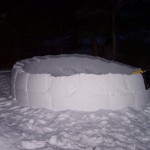 My alter-ego is a geophysicist because, somewhere along the line, I decided I didn’t want to be sitting at a desk all day.  I was under the impression that because geologists are outside all day, geophysicists must be, too.  There is some truth to that argument, but it turns out to not be applicable to the types of geophysics in which I am interested. However, being a geophysicist has given me plenty of opportunity to hang out with geologists, and sometimes they have strange ideas.  On the other hand, it was actually another engineer with an interest in geology that gave me the strangest idea of all.  In fact, he offered me a beer if I could follow through on his idea.  (This is standard fare among geology folk, but I opted for a handmade milkshake from the local hole-in-the-wall burger joint near campus.) This particular friend, along with several […]