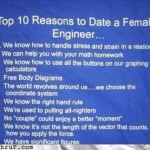 My husband sent me a link to an EDN page featuring a video covering dating advice for engineers.  I want to start by saying that the video was very amusing, so the following is in no way meant as disparaging.  However, it was also very guy-centric, and I wondered what sort of dating advice might be useful for female engineers (which, the video says, are hypothetical…like Bigfoot). So my advice would be: Ignore any guy who says that female engineers are unattractive.  He’s just bitter because he can’t find a date.  It’s karma.  He’s probably also an engineer. You’ll probably want to date another engineer, or maybe a scientist.  Otherwise you won’t have anything to talk about.  (Well, maybe if you have hobby in common.  HAM radio, anyone?)  And saying things like “Higgs Boson” will be just fine. You’ll probably want to date another engineer because, given your salary, you’re […]