At my old job, when one of the engineers retired, he would ceremonially dump everything they had in their office onto a table in the hallway for the rest of us to pick over like vultures.  The coolest thing I ever found was something called a Gerber Variable Scale.

The variable scale is a stretchable spring with markings at regular intervals. When you stretch the spring, the markings change size. The tool is made for transferring markings off graphs without well laid out axes. You can also draw neatly delineated tick marks with it as well, at any size you want! Pretty cool! In the picture below the spring for the scale is compressed all the way.  The little disks are numbers, but most of them seem to have fallen off over the years. 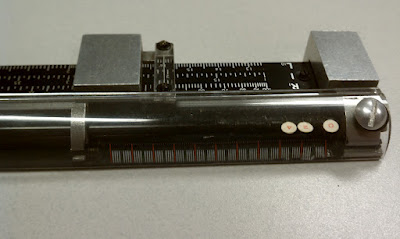 In this picture though, the little silver colored block (the slider) has been moved all the way to the end to stretch out the spring. You can can see that the markings have spread apart. 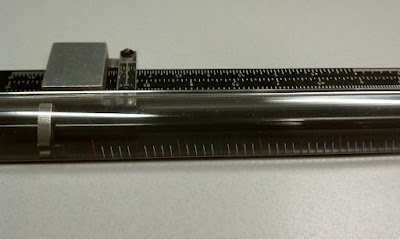 The variable scale has marking for reciprocal, linear, and logarithmic values. It makes it possible to execute some pretty crazy transformations if you want to make a logarithmic graph. 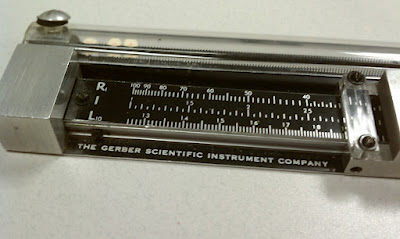 What’s the most useful piece of “trash” you’ve picked at work? (Please include links to pictures if you have any!)
Previous articleWeekend Journal -- The Other Direction of Trickle Down TechonomicsNext article (mis)communicating your work

This is how I came to own my very own Tektronix 455 Oscilloscope.
http://www.us-instrument.com/objects/catalog/product/image/455.jpg

The voltage scale adjustment switch for Channel 2 has some mechanical trouble, and repairing it might make for a summer project if I can find suitable replacement parts. But aside from that, it’s a beautiful instrument.