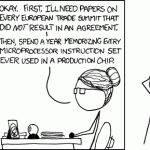 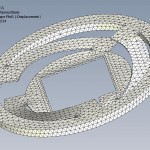 I talked a couple weeks ago about how you can design fixtures and constraints for holding pieces in precise alignment. But not always do you want machine pieces to hold still – sometimes you want them to move. If you want pieces to move a long way (also called “large range of motion”), you can use things like bearings, slides, and gears. But because I work in the precision world, often I want things to move only a small amount – a millimeter or less. (This is much the same as you would use bolts or clamps for fixturing a non-precise machine, but I need to use kinematic couplings for micrometer precision). So I thought today I would talk about designing flexures. And because I came down a little harder than I intended on theoretical engineers last week, I’ll show the modeling I use to design a flexure. (I do […] 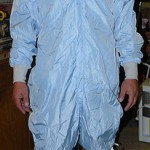 I used to work in a wafer fab. I was a process engineer, shuffling 300mm wafers along as they got dry etched (the step that eats away at the various layers of silicon, oxide, metal or whatever other nasty stuff they put on wafers these days). I haven’t worked there in about 3 years now, as I got out of the wafer slingin’ game and now work with the products made in fabs. (system level electrical engineering) I don’t think about my old job much, but I always seem to while talking to doctors. I can’t help but compare the experiences of being a doctor, specifically an ER doctor, to taking care of wafers and dealing with issues that arise. Now, I’m not trying to say that these are similar in importance (believe me, I wouldn’t have gotten out of the wafer business if I thought it was anywhere as […] 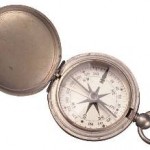 There’s been an interesting back and forth on here where Miss Outlier discussed the conflicts of the theoretical versus the experimental in the week where we discussed interdisciplinary engineering and our struggles therein. Miss Outlier expressed her own point of view in working with theoreticians. Cherish then responded with her post the model engineer a sort of defense of simulations. This was on my mind lately as I had a few separate pieces of analyses that I had to complete this week. Last month I asked the question of whether a design can be too robust. I talked about the issues inherent where an engineer is expected to make predictions on the future. Sometimes predictions that have critical safety connotations. These can be terrifying, especially to an early career engineer. In my experience I’ve been asked to do analyses that fall into two separate categories. The first is a theoretical prediction […] 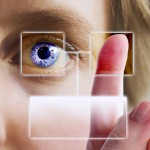 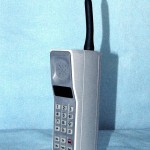 The Next Big Thing

Every day, most of us are inundated with technology. The advances (and advantages) my generation has over my parent’s generation are enormous. Today, I thought I would discuss the five things that changed my generation for better or worse, depending on your perspective. In other words, I’d call it the list of “I wish I invented that”. I’m curious to see if our readers agree or disagree, and which ones they would change. These are loosely listed in order, saving the best for last. (My picture probably gives it away…) 5. USB Sticks Until about 7-10 years ago, flash memory was difficult to manufacture and was largely used in PCs for permanently storing data that could be used to carry the protocols that you needed to access your real data (hard disk drives). With USB devices becoming the standard for PC interconnections, this was the prime opportunity for USB storage to thrive. […] 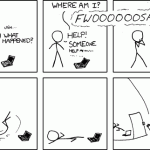 Last week, Miss Outlier’s contribution to the cross-disciplinary work theme discussed how she doesn’t believe in the modeling approach to engineering.  Given simulation work is my bread and butter, I felt the need to respond at length to her post.  However, I’ve already discussed many of the issues on my own blog.  I’ve talked about how people who don’t believe in modeling often don’t understand validation, how one needs to understand the limitations of modeling, and also why I find modeling fun.  As I’ve addressed most of the main points, you might think I have nothing left to say. However, I could not let this comment pass: Where is the enjoyment when you spend all the day in front of the computer? No wonder the stereotype is that the programmers running the algorithms are anti-social  – if I spent my whole career interacting […] 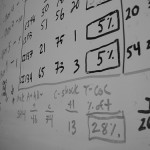 As we talk about cross-functional issues this week, I have to say that’s it not always communication BETWEEN engineering disciplines that causes problems. For problems like that, you just have to learn the correct lingo, and talk to the people in the other discipline, and you are good to go. If the problem is communication with a mixed discipline like controls engineering (which is people like me!), apparently the key is that we just need to make sure we keep a grip on reality! But like Chris did in his discussion of old engineers, I want to talk about a problem WITHIN a discipline. Take this all with a grain of salt; it’s just good-natured ribbing… I’m talking about theoretical engineers and experimental engineers. Now I admit that theory and experiment have different applications in every discipline, but in my world of Mechanical Engineering research, I have little use for theoretical people. […] 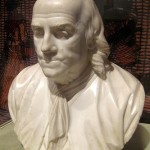 Yup, this week on Engineer Blogs, we’re talking about cross-functional engineering teams and working with engineers that aren’t like our own field. And in the true nature of someone that writes articles at the end of the week, I’d like to discuss the things that all our other wonderful writers haven’t mentioned yet (like my post reversing how the world looks at engineers). I mean, I need to keep the topics fresh and snappy, ya know? Anyway, this week, I’d like to talk about those engineers in a group that a bit “off”. That sub-group of the engineering fraternity that no one seems to understand. The group that had a really strong period, but now have started to fade into the background. The group? Surely, it must be civil engineers, right? Or what about chemical engineers, who needs those guys anymore? What about those crazy mechanical engineers, machine shop is so […] 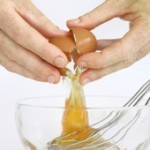 To Make an Omelette

Sometimes a good project is like a good kitchen. You have the chef in charge and you have everyone else working at their specialty to make an amazing meal. This week’s topic here at Engineer Blogs has been interdisciplinary experiences: which I think is incredibly appropriate given our writers already form an interdisciplinary team. Cherish talked about getting a foundation (see what I did there?) in mechanical engineering from her geology background. GEARS ranted on controls engineers(we’re all agreed they are the step-cousins of the engineering family, right?). Paul proved not all sparkies are hopeless at manufacturing and production with his jack of all trades background. I’ve spoken on my own blog how I got off to an early start in engineering with electromechanical devices and cabling. I think of it sort of as an ugly inbetween in the worlds of electrical and mechanical engineering. As I spoke about on my blog, […]